U.S. counties with the same name. 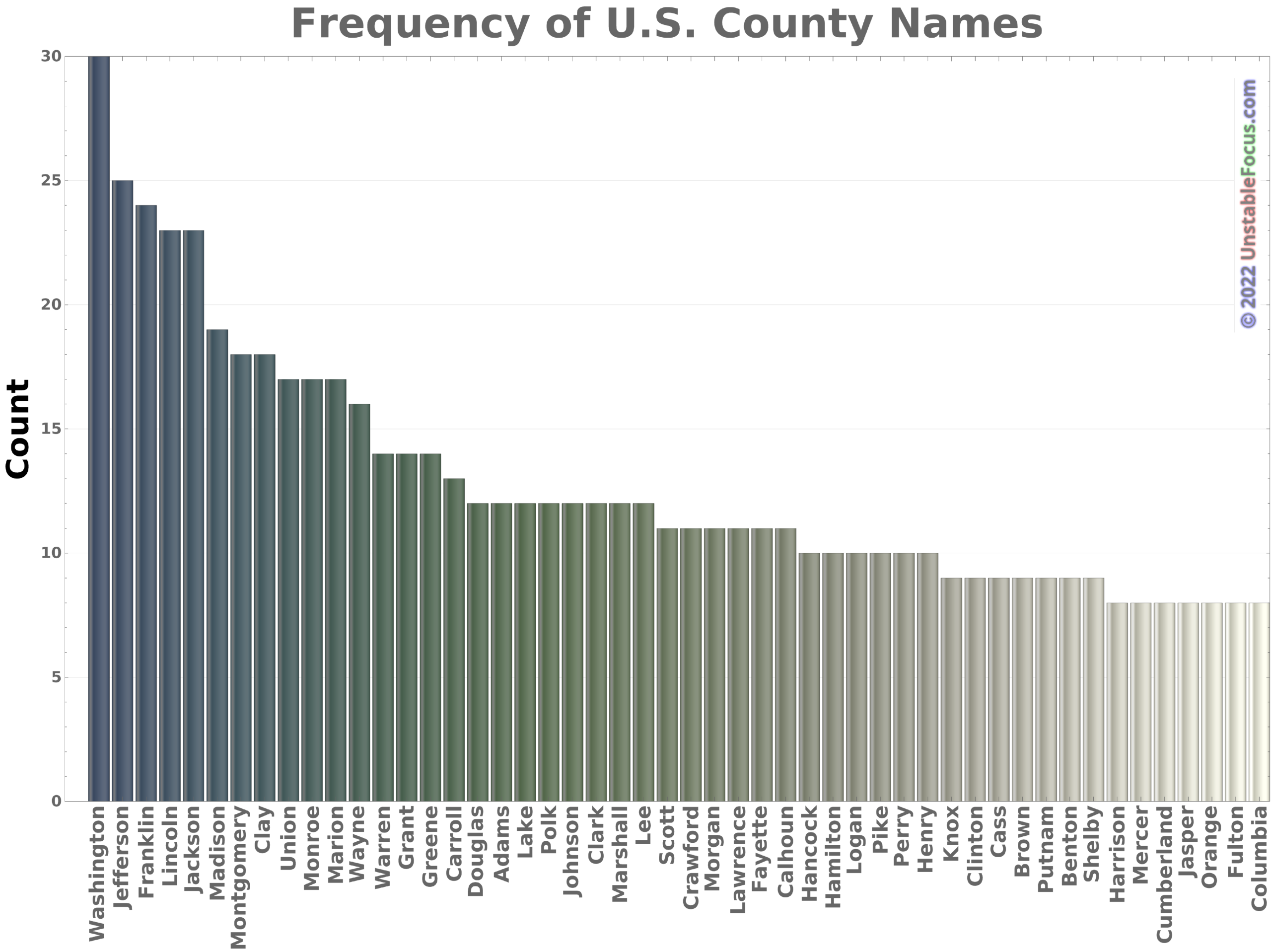 The animation below shows where counties with the same name are located.

This shows where each state gets its revenue.  This is just money going directly to the state so property taxes (which in most states go primarily to local governments) do not appear for most states or are a small fraction.  Most states get their revenue from sales and income taxes.  Severance taxes are those imposed on resources (oil, etc.) taken from state lands. 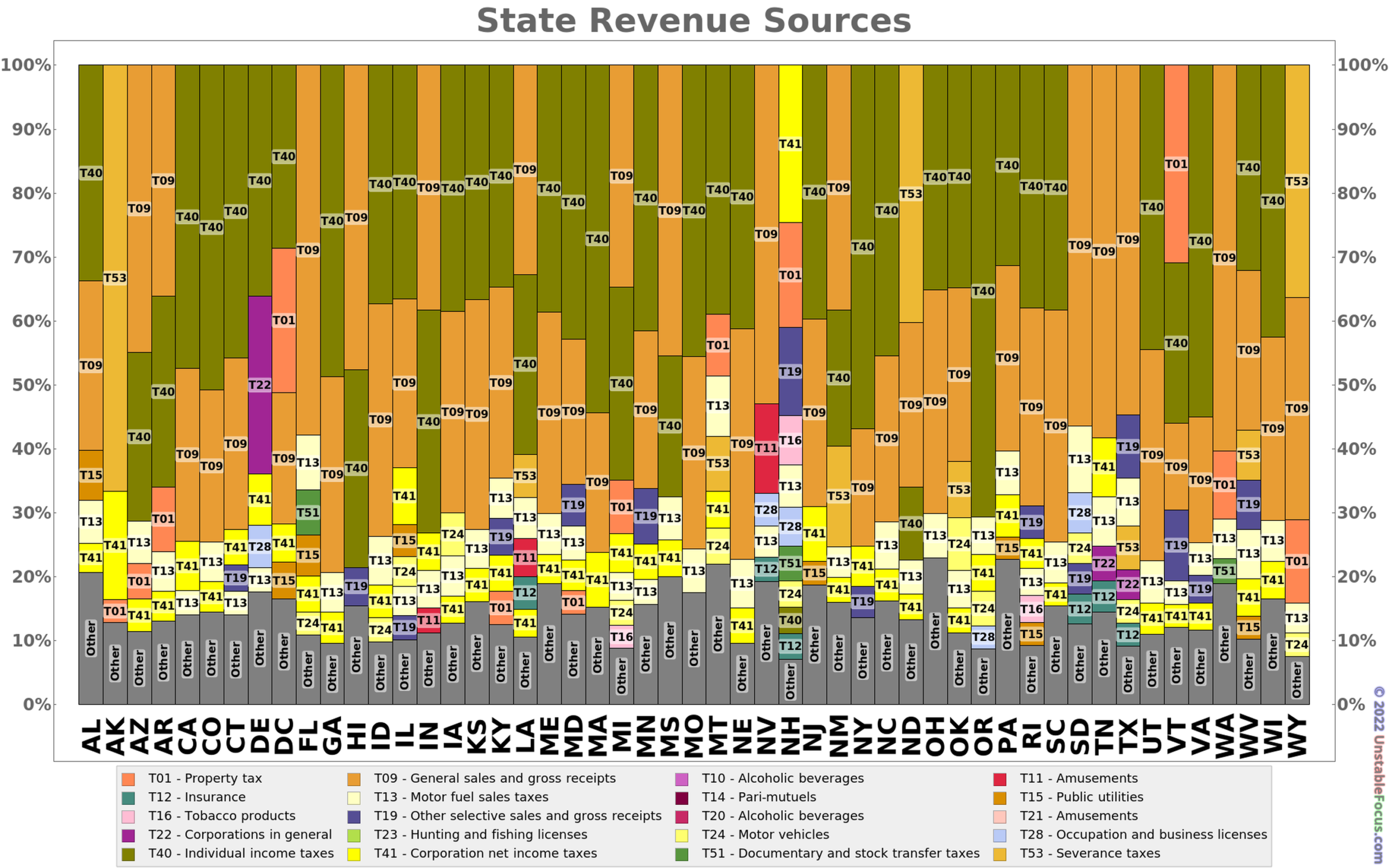 This shows how total state taxes and fees have changed since 1996 if inflation using the CPI is taken into account.  Thus, the dollars on the vertical axis are 1996 dollars. 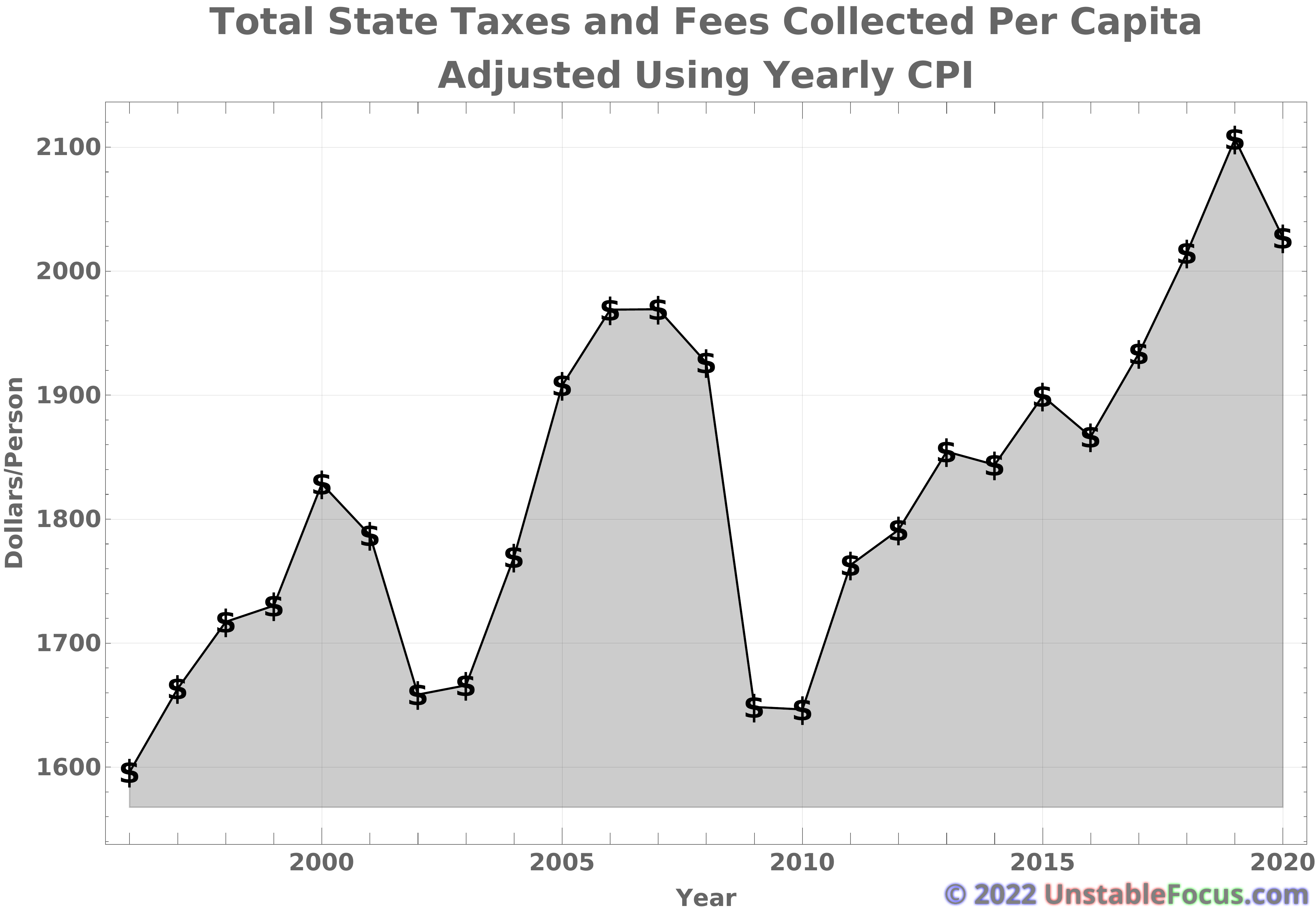 This shows how total state taxes and fees have changed since 1996 if inflation is not taken into account.  Thus, the dollars on the vertical axis are “real” dollars. 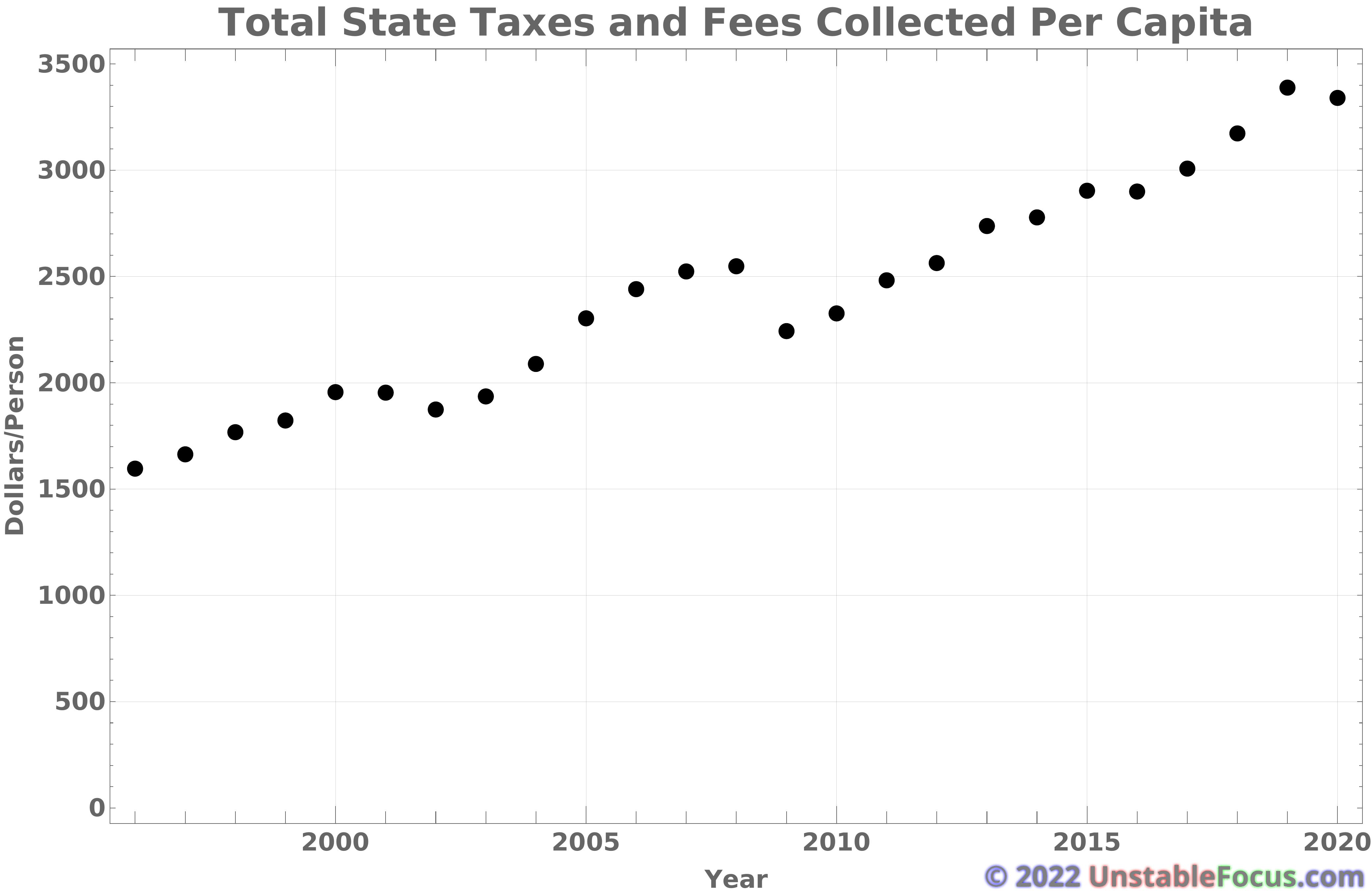 The linked animation below shows the crude oil imports to and exports from the United States since 1991.

The linked animation below shows the total petroleum imports to and exports from the United States since 1991.

The linked animation below shows the gasoline imports to and exports from the United States since 1991.

The animation below shows the trade (imports and exports) volume in U.S. dollars between major trading nations from 1981 to 2020.  The color scale is logarithmic since there are vast differences in trade.

The image below shows the number of people with a Wikipedia page with a given birth year since 1 CE (AD).  The vertical scale is logarithmic since the number of pages is growing logarithmically.  It’s not clear what was going on in the 1600s when the number of notable people (at least since the start of Wikipedia) stagnates.  Before 1700, many birth years are rounded leading to notably more scatter.  This was produced in early January 2022 when eight newborns already had pages. 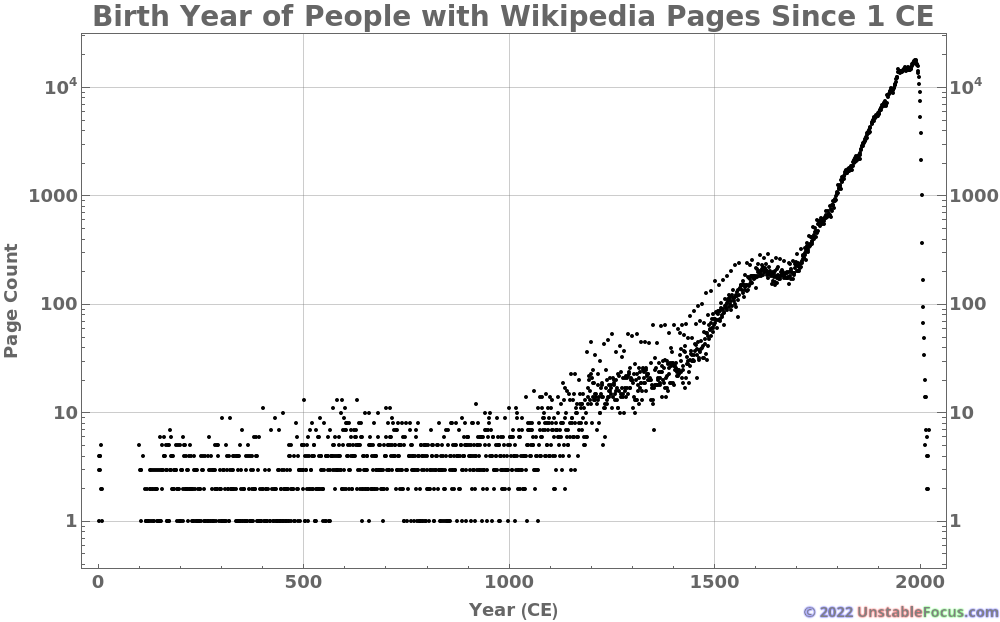 The utterly gratuitous bar graph below shows the number of notable people (i.e. ones with Wikipedia pages) that died from 1998 through 2021.  I made this to try to convince some of my crazy friends that COVID-19 was actually real, and a lot of extra people were dying.  I don’t think it made any impact.  Lol. 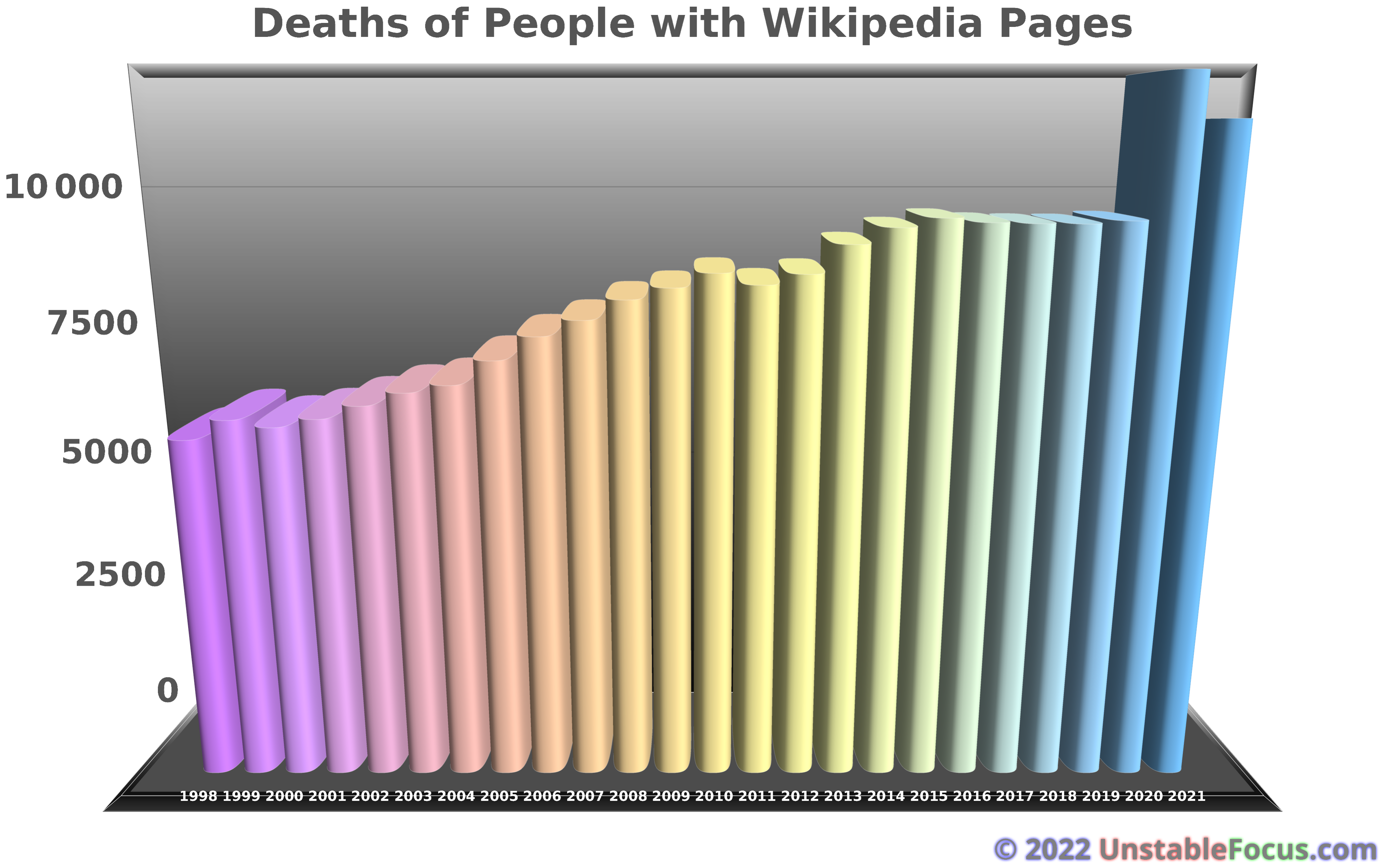 The chart below expands the one above to include all years since 0 CE (well, actually, 1 CE).  As with the births of people with Wikipedia pages, there is a strange stagnation between around 1650 and 1750.  It is not clear what accounts for this.  You can also see spikes around the first and second world wars.  The increase in 2020 and 2021 is also clear.  When this was made around the second week of January 2022, about 35 notable people had died. 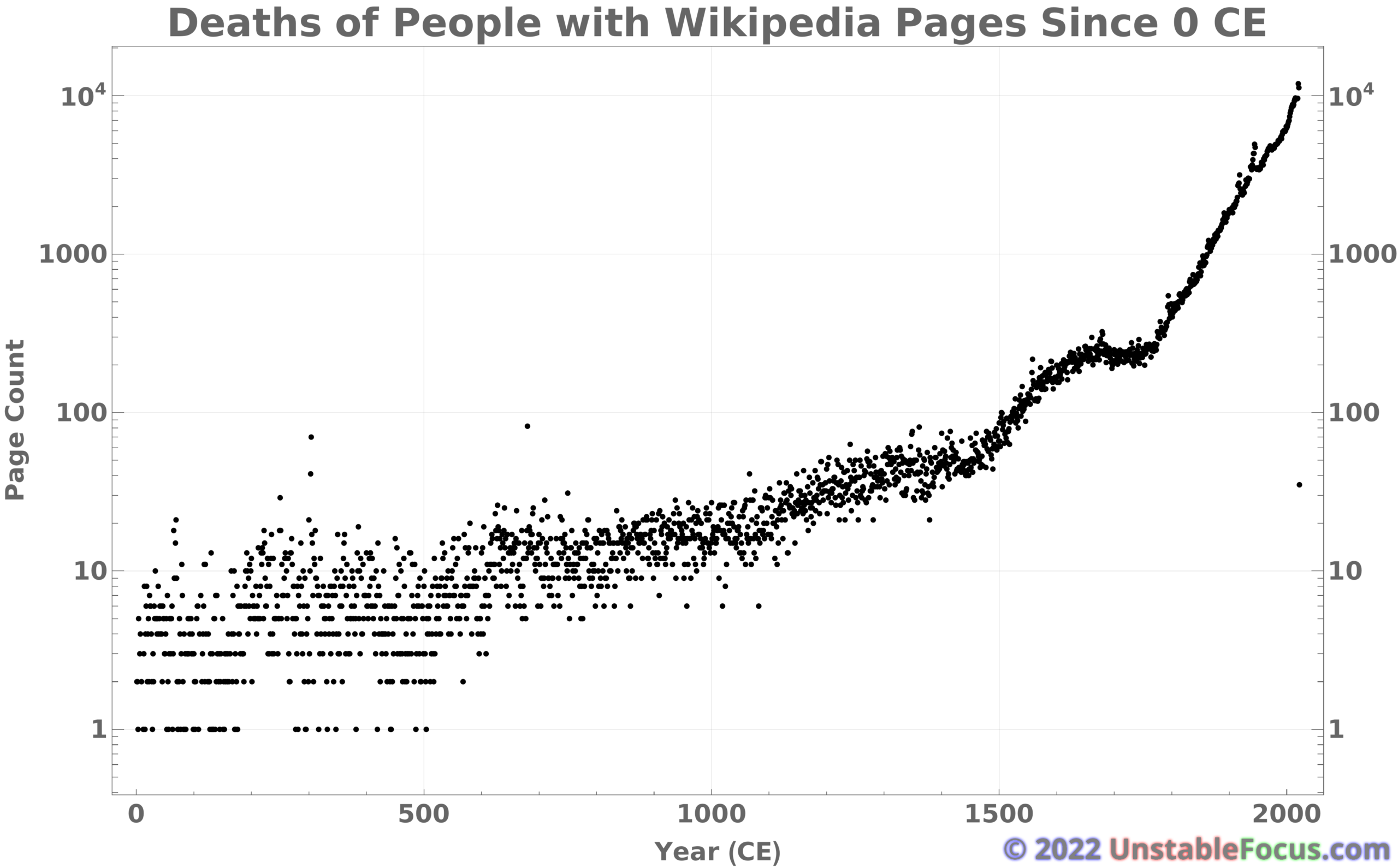 The graph below shows the same information as the one above but is now normalized with an estimate of the world’s population.  The peak in deaths of notable people during WWI and WWII are now even more prominent.  In 2020 and 2021, about one in two million people had their death recorded on a Wikipedia page. 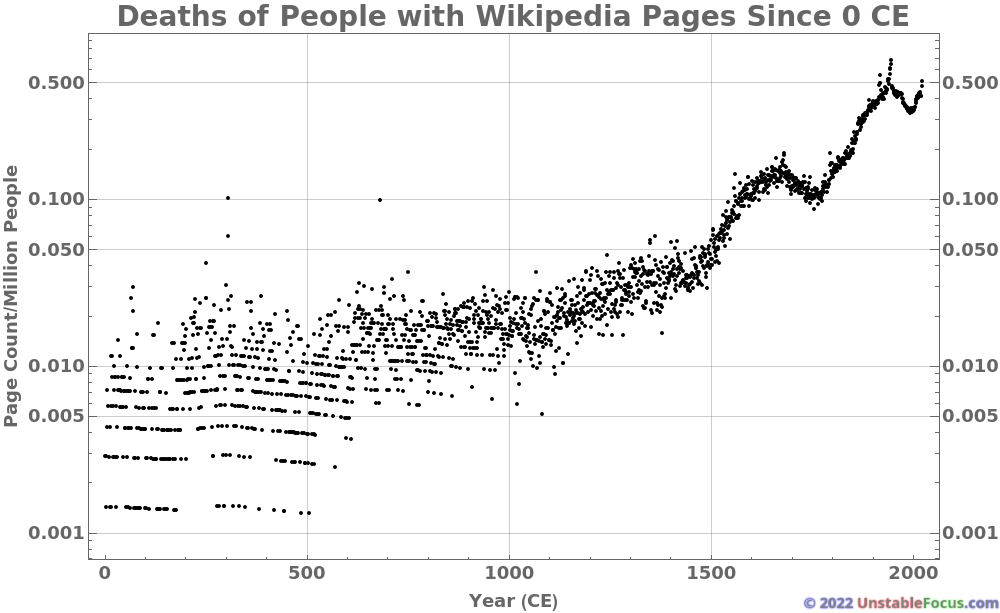